Copy, Rip, Burn: Reviewed in THE 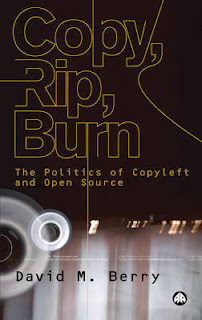 Copy, Rip, Burn: The Politics of Copyleft and Open Source


The production of non-proprietary software, more commonly known as free/libre and open-source software (FLOSS), has taken parts of the academic, activist and governmental world by storm. It has not only forced an intellectual reassessment of theories of human nature and creativity that help justify the expansion of intellectual property regimes, but it has also inspired academics, journalists and activists to craft similar endeavours.

David Berry, mindful of these developments, has written a persuasive account on the politics of copyleft and open source. Copy, Rip, Burn stands apart from its cohort because of its overtly critical bent. Berry offers a rich discursive analysis of FLOSS, but also situates it within the backdrop of capitalist forces that ultimately blunt, he argues, its radical potential. Within this general frame, he also builds - and this is the intellectual heart of his book - a typology drawn from the Roman legal system, which he uses to explode the binaries between private/public and property/commons commonly used to describe FLOSS. Given Berry's fresh intellectual contribution, this book is a must-read for any scholar or activist interested either in FLOSS or the general politics of IP regulation.